Nancy Druckman, who had worked at Sotheby’s for 43 years as an expert in American folk art, has left to form her own art advisory service.

Druckman began cataloging American folk art for the sale of the Edith Gregor Halpert collection in November 1973. Her next big assignment was to catalog fraktur, embroidered needlework, theorem paintings, cutwork pictures, and American folk art watercolors from the collection of Colonel Edgar William and Bernice Chrysler Garbisch, which was sold in three catalogs in January, May, and November 1974. Her name does not appear in those catalogs.

In 1979 she was listed as “expert in charge” of the landmark auction of Stewart E. Gregory’s collection, the first sale at Sotheby Parke Bernet with a buyer’s premium.

In 1980 she worked on the Garbisch house sale at Pokety on Maryland’s Eastern Shore and the Helen Janssen Wetzel house sale in Reading, Pennsylvania. Later in the 1980s, she masterminded the sale of samplers from the estate of Theodore Kapnek and the sale of Barbara Johnson’s whaling collection.

Druckman was known at Sotheby’s for forging good relationships with clients and for tenaciousness in getting property consigned. “There was no one better in landing a sale than Nancy Druckman,” said William Stahl, who headed decorative arts at Sotheby’s until the end of 2009. As head of Americana since 1975, he had worked closely with Druckman over the years. 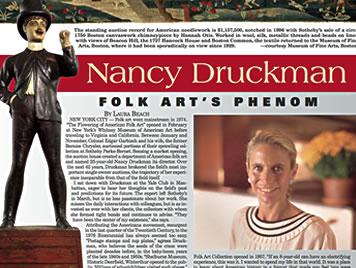 Journalist Laura Beach sat down with Nancy for this fascinating profile of her career in American Folk Art and the experience that makes her "inseparable from that of the field itself."

Nancy Druckman directed Sotheby’s American folk art department since 1974, building it into the market leader while establishing herself as a pivotal figure in the field. In her new role as an independent consultant, she will offer strategies for collections management, advising clients on buying, selling, donating and documenting works.

An advisor to museums and institutions, Druckman has been especially active in the American Folk Art Museum and has appeared on all but two seasons of the PBS series Antiques Roadshow.

Druckman said, “I have been tremendously fortunate in my career. I love the art and I love the people. I’m enormously invested with my clients. They are the center of my professional existence. This gives me the opportunity to work with the same people who have been part of my life for the last 40 years, being a resource for whatever their needs may be.”